Down in the Gloucestershire countryside is Over Farm. Usually home to chickens, ostriches and Christmas trees, for one weekend every year it also hosts Barn On The Farm Festival. Celebrating its 10th anniversary this year, they pulled out all the stops to bring you an almighty line-up of the hottest rising talent on offer and they did not disappoint. Here’s our highlights from across the weekend. We kicked things off at Barn On The Farm with feisty new pop singer, L Devine, (it was easy to tell her it was her from the giant, light-up L behind her). Playing tracks from last year’s EP, Peer Pressure, as well as recent single ‘Naked Alone’, she bounced around the stage delivering her fierce pop bangers with attitude. The standout moment though, was her rendition of ‘Daughter’. A song written about her first love and her girlfriend’s disapproving mother, she dedicated it to everyone celebrating Pride month and transformed it into a gentle ballad with just her and a guitar, laying her heart on her sleeve for everyone to see. Over on the main stage quite the crowd had gathered for such an early slot. Music started with no band in sight, as woozy vocals set up the scene for the performance ahead. Then, one by one each member of Easy Life took to their designated instruments and were at one together on the stage. Oozing super chilled vibes, it was the perfect way to see in the afternoon in the sunshine, with ‘Temporary Love Part 1’, ‘Nightmares’ and tracks from their Spaceships mixtape sounding utterly blissful. Plus, who doesn’t enjoy a bit of saxophone and electric flute? 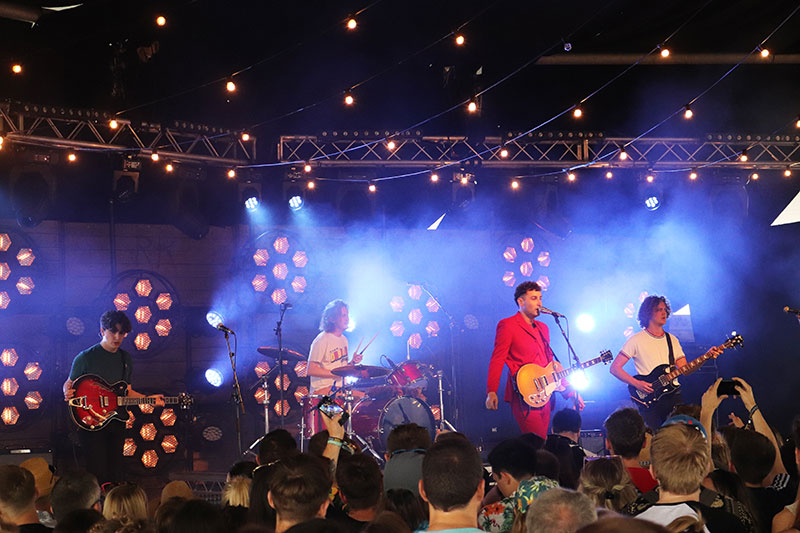 Strutting onto the main stage in a red suit, Sea Girls frontman Henry Camamile radiated indie swagger and together with his fellow comrades, set about delivering a full-throttle performance. Using their summer of festival slots as a warm-up for their biggest ever headline tour later this year, it’s clear the practice has done them good as the put on an impressive display of upbeat indie bangers, which go down rather nicely in a farm field. 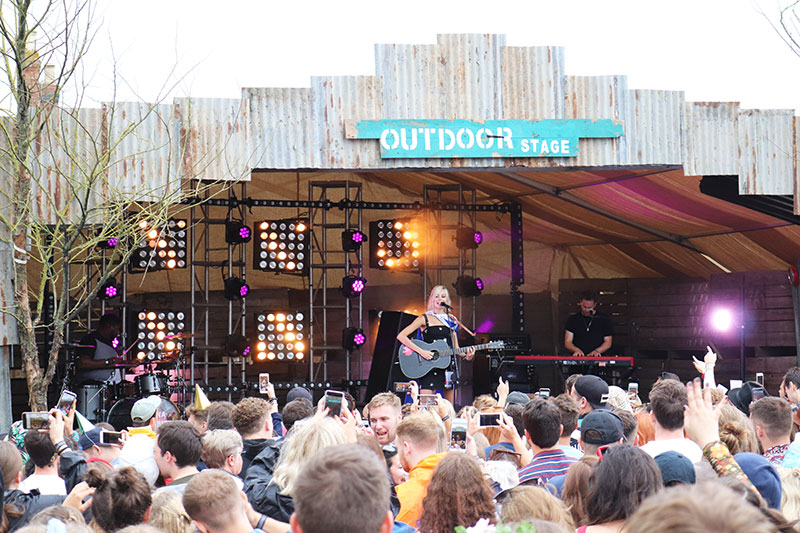 Nina Nesbitt has gone through quite the evolution as an artist, transforming herself into pop’s new princess with her album, The Sun Will Come Up, The Seasons Will Change and her stage sass works perfectly with her new sound over on the Outdoor Stage. Dishing out stories of love, heartbreak and f**kbois, the new material is our generation’s dating soundtrack, served up with a slice of ice queen. ‘Love Letter’ offered out a Destiny’s Child cover, ‘Somebody Special’ got her facetiming a fan and at one point she was wearing a Scottish flag and everyone immediately wanted to become her best friend. 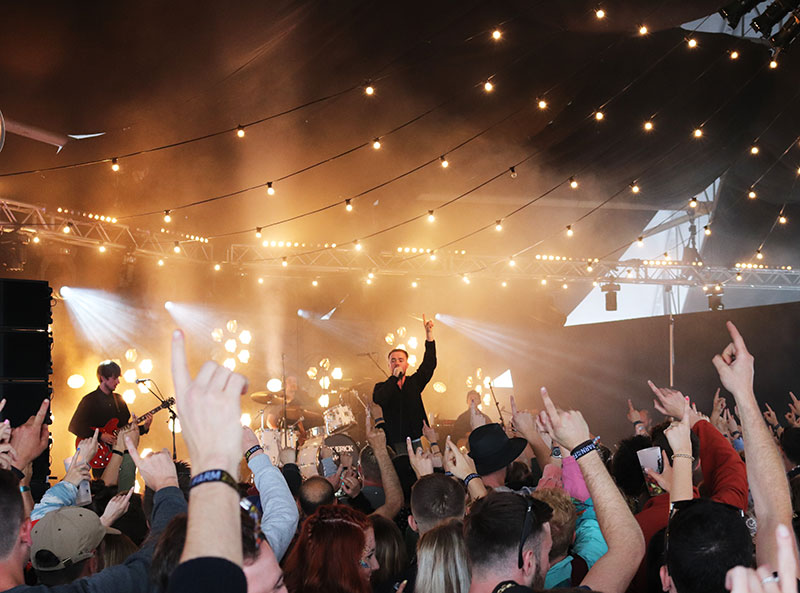 Back after a four-year break with stunning new album, When I Wake Up, Maverick Sabre took to the main stage as if he’d never been away. Backed by a full band, his new material truly came to life and sounded bigger than ever, whilst his vocals bellowed around the festival site with those soulful, bluesy notes just how we remembered. Throwing in a medley of Khalid’s ‘Location’, Usher’s ‘You Remind Me’ and Craig David’s ‘7 Days’, he got everyone pulling out their best dance moves, before then raising their hands as a symbol of togetherness, of community and of love. A spectacular set from one of the most talented vocalists on offer right now. 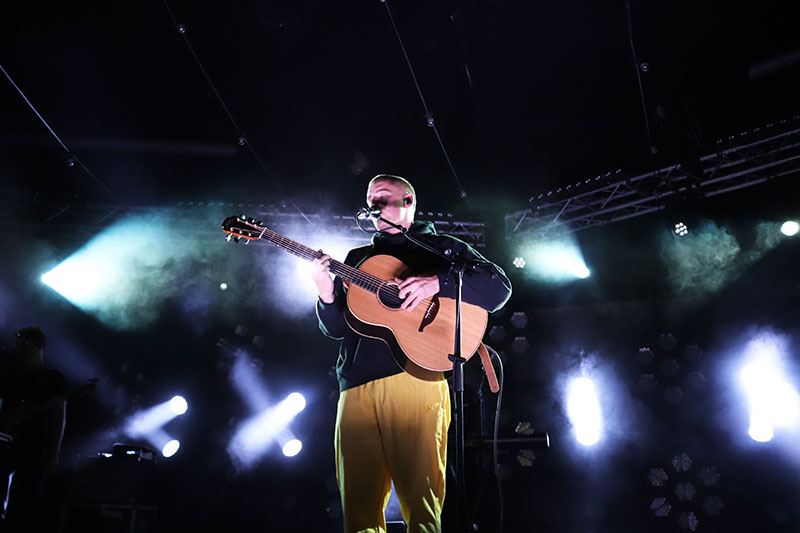 Somewhat of a hero at Barn On The Farm, Dermot Kennedy flew all the way from Barcelona to play his debut festival headline performance when Sam Fender sadly pulled out due to ill health. A worthy replacement judging by the sheer amount of people who turned up to see the Irish singer-songwriter do his thing. For someone who hasn’t yet released his debut album, he filled the 90-minute set with ease, throwing in some unreleased songs to tease us ahead of the album’s release. Emotional, raw and powerful, each and every word was sung with passion as the crowd echoed back, with the poignant words of, “You won’t go lonely” from ‘After Rain’ sending shivers up spines as he closed out his performance. Having made serious waves this year already with his gritty guitar tones and British indie vibe, Tenn Tonnes had no trouble at all in getting everybody out of their hangovers and enjoying his sweet sounds. Performing a strong selection of tracks from his debut self-titled record, he proved why he’s been such a hot topic of discussion in the music world, as a big grin spread across his face from beginning to end. It was the finale of ‘Lucy’, though, which truly stood out as a victorious moment for the young singer. 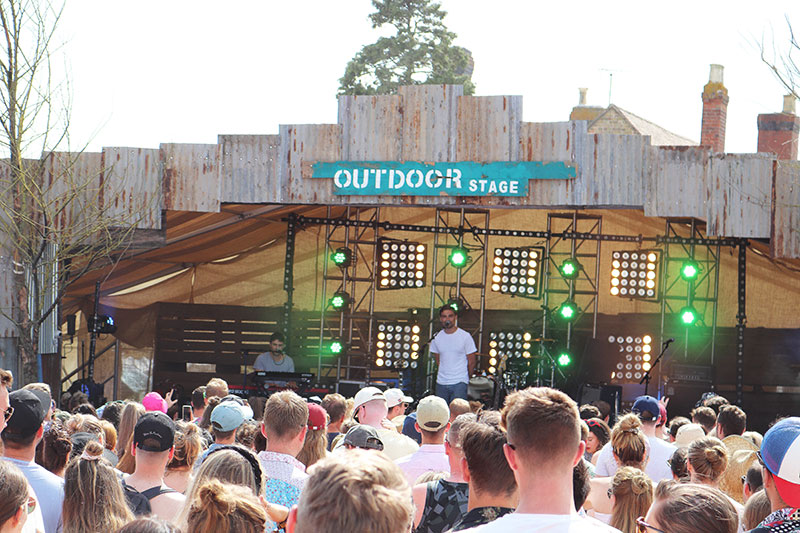 Sunday on the Outdoor Stage and it was sad songs galore with Rhys Lewis flaunting his stunning vocal and heart-tugging lyrics with pride. Having released his EP, In Between Minds, just a few months ago, this was one of the first outings for his new material and it sounded really quite magical as the sun glistened behind him. Simple and stripped back with just him and piano player, you could see everyone listening intently to every word he sang and for half an hour we basked in the beauty of his music. 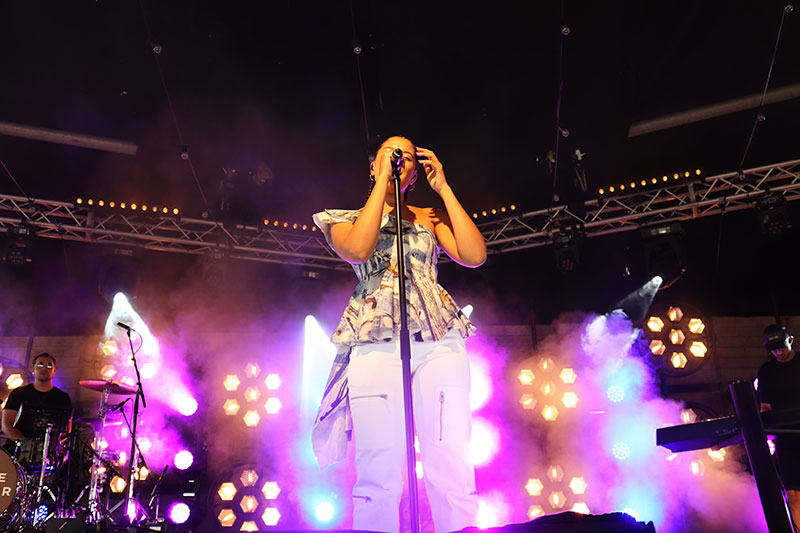 Keeping the vibe low and slow back on the main stage was rising singer, Grace Carter. A touching performance from the very start, she sung about family and love, dedicating a song to her mother as tears nearly filled her eyes. Her vocal range is astonishing and it’s easy to see why she’s being highlighted as one of the UK’s brightest talents. Heading out on tour with fellow festival companion Lewis Capaldi this year, we’re already counting the days until we can witness her stunning live show again. Whispers were spreading weeks before the festival as to who would be the surprise headliner on the Sunday night and attendees were left in confusion after the name Reggae Zero appeared on the programme. With a little bit of detective work, a few sussed it out ahead of the slot, but still we saw everyone run to the main stage to get a glimpse of who it was. “Hello, I’m Reggae Zero” came an all too familiar voice, as cheers bellowed and George Ezra burst into his summer-ready hits off of latest album, Staying At Tamara’s. Despite an injured foot that meant he was bound to a stool, he still got the party going in full swing and we all danced to the easy-going anthems. A rare moment to see him in such an intimate setting, it was an unforgettable addition to what was already a wonderful weekend. 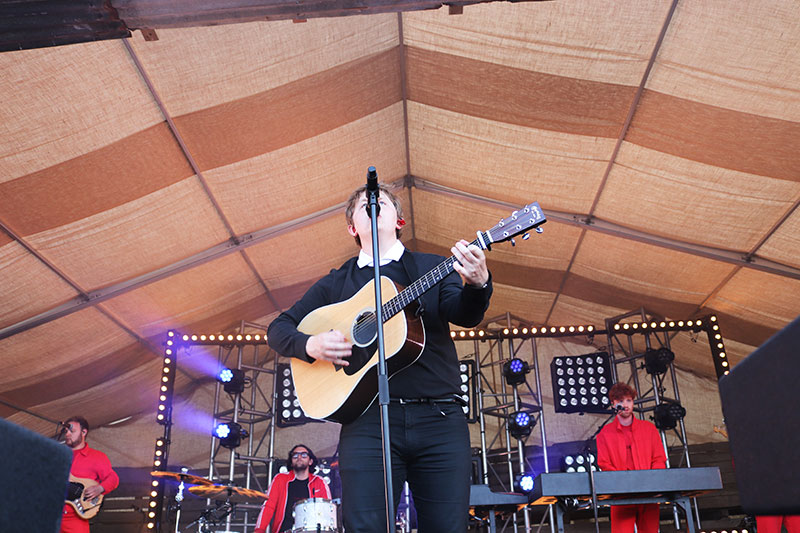 It was pretty obvious that there was one man that everyone was here to see and as people started to break away early from George Ezra’s set, we knew it was going to be rammed for Lewis Capaldi’s performance. Headlining the Outdoor Stage, he sashayed onto the stage with the cheeky smile on his face that everyone has come to love. Dressed as, in his words, “a sexy priest”, he wooed the crowd with his banter and even picked on the festival for not booking him a few years ago when he applied to play, oh how things change! Opening track ‘Grace’ kicked things off in style, but it was record-breaking hits, ‘Bruises’ and ‘Someone You Loved’ that caused the biggest sing-a-longs of the entire weekend. An artist whose career is only continuing to grow, it was charming, humble and heart-warming to watch. 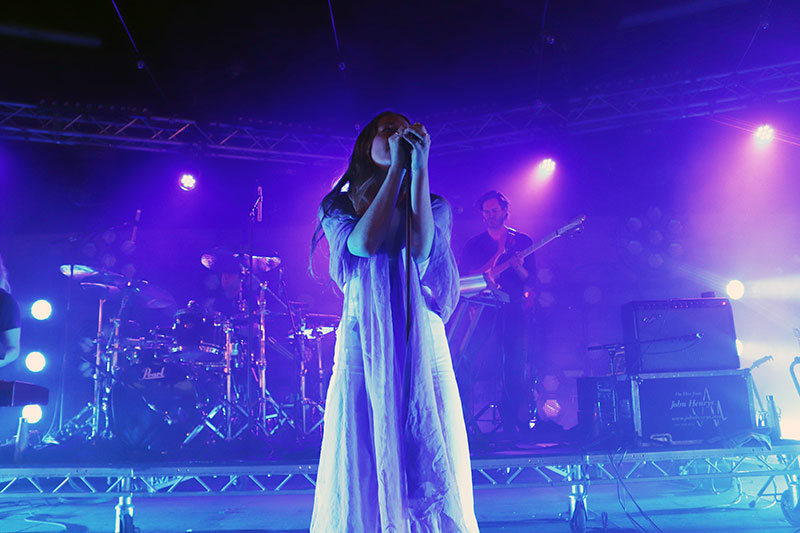 At the start of the year, Maggie Rogers released her debut album, Heard It In A Past Life and the world instantly fell in love with her spirited pop sound. Having already completed a number of huge headline shows in support of the record, including a breath-taking performance at O2 Academy Brixton, it was time for her to wrap up her international touring schedule with her first ever festival headline slot. Floating onto the stage and jumping straight into the album’s opening track, ‘Give A Little’, her excitement was infectious. ‘Burning’ and ‘On + Off’ felt a little extra special in this performance but it was ‘Light On’ which made it feel like we were experiencing a moment of a lifetime. Confetti exploded above our heads as people squealed with joy, Maggie and her band shared champagne and we felt an overwhelming sense of joy spread across the farm – an incredible ending to an incredible festival hidden in the Gloucestershire countryside.